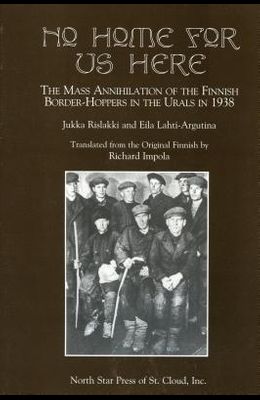 No Home for Us Here: The Mass Annihilaton of the Finnish Border-Hoppers in the Urals in 1938

During World War II, an estimated six million Jews lost their lives to Hitler's vision of a pure German race. This horrific loss of life has been condemned the world over . . . and should be. But, by the time the Nazis geared up their campaign against the Jews, another, far more deadly campaign approached completion: the annihilation of Finns from Russian soil. Many thousands of Finns, looking for relief from the world-wide Depression of the 1930s, skipped across the border to Russia looking for work. Some had lived their lives on soil Russia now claimed as hers. Many other Finns from America and Canada and elsewhere came, on invitation, to Russia to find the Worker's Paradise. Very few of these Finns found their way home. What they faced instead: heavy work, privation, starvation, torture, and, finally, death. In the Stalin purges, the work camps, the prisons, an estimated fifteen million Finns died. Their stories need to be told.