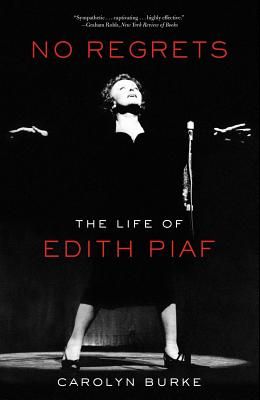 No Regrets: The Life of Edith Piaf

The iconic French singer comes to life in this biography, which captures Edith Piaf s immense charisma along with the time and place that gave rise to her international career. Raised by turns in a brothel, a circus caravan, and a working-class Parisian neighborhood, Piaf began singing on the city s streets, where she was discovered by a Champs Elysees cabaret owner. She became a star almost overnight, seducing all of Paris with her passionate voice, and No Regrets explores her meteoric rise; her tumultuous love affairs; and her struggles with drugs, alcohol, and illness. Piaf was an unlikely student of poetry and philosophy who aided Resistance efforts in World War II, wrote the lyrics for nearly 100 songs, including La vie en rose, and was a crucial mentor to younger singers such as Yves Montand and Charles Aznavour. Burke demonstrates how, with her courage, her incomparable art, and her universal appeal, the little sparrow endures as a symbol of France and a source of inspiration to entertainers the world over.