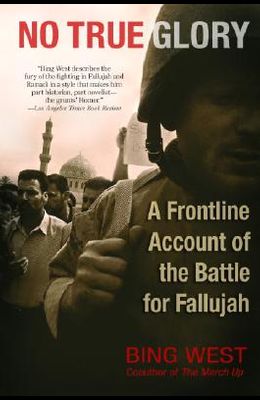 No True Glory: A Frontline Account of the Battle for Fallujah

Here, in this singular book, is the unprecedented frontline look at the struggle in Iraq to replace American soldiers with Iraqis in the face of continued resistance. What unfolds is a vivid portrait from a veteran author who is in the line of fire right now.

From the front Cover There is no glory in battle worth the blood it costs. ----General Dwight D. Eisenhower For months author F. J. Bing West lived among the Marines who besieged the insurgent stronghold of Fallujah, and interviewed members of the three US Army units that fought in that factious city before the Marines arrived. With access from frontline personnel to senior policymakers and negotiators, West's astonishing account takes us into strategy discussions between generals, on tense night patrols, and into fighting from rooftop to rooftop to tell the story that hasn't been told in the press or on the nightly news. The Marines originally planned to slip into Fallujah as soft as fog. But in March 2004, after a mob killing and mutilating four American contractors was recorded in images that horrified the world, the Marines attacked. West recounts the ferocious street battles that followed, the stiff resistance and shocking violence that caught many in our military and government off guard, and the sweeping US counterattack that outraged the Arab world. We go behind the scenes to the intense negotiations to persuade Iraqis to take charge and hunt down terrorists like al-Zarqawi, who were using the city as a sanctuary-negotiations whose ramifications will impact Iraq for years to come. But the real focus is upon the heroic, everyday efforts of the American fighting soldier and Marine confronting the key paradox of the war: that the Iraqis both wanted and didn't want Americans in their country. No True Glory is a firsthand account of the gritty fighting, political maneuvering, and ongoing struggle in this crucial city-a microcosm of the confused and frustrating Iraqi war.

Books similiar to No True Glory: A Frontline Account of the Battle for Fallujah