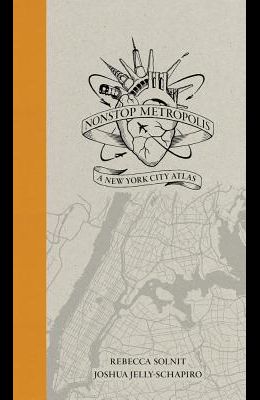 Winner of the 2017 Brendan Gill Prize from the Municipal Arts Society of New York The maps themselves are things of beauty... a document of its time, of our time. --Sadie Stein, New York Times One is invited to fathom the many New Yorks hidden from history's eye... thoroughly terrific. --Maria Popova, Brain Pickings Rebecca Solnit and Joshua Jelly-Schapiro's collection achieves the trifold purpose that all good cartography does -- it's beautiful, it inspires real thought about civic planning, and, most of all, it's functional.-- The Village Voice ...the New York installment of the Atlas Trilogy ] is eccentric and inspiring, a nimble work of social history told through colorful maps and corresponding essays. Together, Solnit, Jelly-Schapiro and a host of contributors -- writers, artists, cartographers and data-crunchers -- have come up with dozens of exciting new ways to think about the five boroughs.-- San Francisco Chronicle ...the book...contains many beautiful and not-so-beautiful images that document New York's past and the present, and make tangible the social and cultural diversity of this extraordinary place. -- Times Literary Supplement Nonstop Metropolis . . . .is impressionistic, a gallimaufry of takes on neighborhoods and topics. . . .The writing and the maps are what place is about: desire, fear, landmark, memory, imagination, a state of mind, sometimes melting into thin air -- but still right there under your feet.-- Christian Science Monitor The sum of it all is, like New York itself, overwhelming, alluring and dazzlingly diverse.-- Jewish Daily Forward 26 maps of New York that prioritize bachata over Broadway, pho over pizza.-- Wired.com A 20 Big Indie Books of 2016 selection-- Publishers Weekly All will come away from this New York City volume with newfound love for the beguiling, legendary, volatile town...an engaging and enlightening read for anyone who loves New York City, creative scholarship, and top-notch graphic design.-- Foreword Reviews Nonstop Metropolis, the culminating volume in a trilogy of atlases, conveys innumerable unbound experiences of New York City through twenty-six imaginative maps and informative essays. Bringing together the insights of dozens of experts--from linguists to music historians, ethnographers, urbanists, and environmental journalists--amplified by cartographers, artists, and photographers, it explores all five boroughs of New York City and parts of nearby New Jersey. We are invited to travel through Manhattan's playgrounds, from polyglot Queens to many-faceted Brooklyn, and from the resilient Bronx to the mystical kung fu hip-hop mecca of Staten Island. The contributors to this exquisitely designed and gorgeously illustrated volume celebrate New York City's unique vitality, its incubation of the avant-garde, and its literary history, but they also critique its racial and economic inequality, environmental impact, and erasure of its past. Nonstop Metropolis allows us to excavate New York's buried layers, to scrutinize its political heft, and to discover the unexpected in one of the most iconic cities in the world. It is both a challenge and homage to how New Yorkers think of their city, and how the world sees this capital of capitalism, culture, immigration, and more. Contributors: Sheerly Avni, Gaiutra Bahadur, Marshall Berman, Joe Boyd, Will Butler, Garnette Cadogan, Thomas J. Campanella, Daniel Aldana Cohen, Teju Cole, Joel Dinerstein, Paul La Farge, Francisco Goldman, Margo Jefferson, Lucy R. Lippard, Barry Lopez, Valeria Luiselli, Suketu Mehta, Emily Raboteau, Molly Roy, Sharifa Rhodes-Pitts, Luc Sante, Heather Smith, Jonathan Tarleton, Astra Taylor, Alexandra T. Vazquez, Christina Zanfagna Interviews with: Valerie Capers, Peter Coyote, Grandmaster Caz, Grand Wizzard Theodore, Melle Mel, RZA

From the front Cover I am thrilled to have another book-object in this series, as I devoured the San Francisco volume when I was there, and the New Orleans one likewise. Now finally here is one about the town where I live. The format, with the maps, networks, and accompanying stories and histories, is a lovely, nonlinear way of mirroring the almost infinite layers that make up a city. We all have our own mental maps of our cities and the ones we visit--maps that are, like the ones here, historical, musical, temporal, personal, economic, and geographical. The maps in Nonstop Metropolis are a good approximation of how we New Yorkers experience and perceive the city we live in.--David Byrne Put your map apps and your GPS away, because none of those high-tech innovations will lead you to the immense satisfaction that this hard-to-put-down book is full of. The unique, clever, and artistic maps give you the who, what, when, and, most importantly, where of loads of unusual and little-known New York City histories. As a New York City native I finally have all the maps I need to the treasures and secrets of my hometown.--Fab 5 Freddy A new way to think about the cultural and political life of cities.--Randy Kennedy, New York Times Solnit, well known for her writing on politics, art and feminism, has turned her attention to New York City's complexities in Nonstop Metropolis , the third of her trilogy of atlases and accompanying exhibitions.--Alex Rayner, The Guardian Selected praise for Infinite City and Unfathomable City A thought-inducing collection of maps that will challenge your view of what atlases can be.--Kevin Winter, San Francisco/Sacramento/Portland Book Review A deeply illuminating assemblage of maps and essays.--Lynell George, Chicago Tribune Inventive and affectionate.--Lise Funderburg, New York Times Book Review Brilliantly disorients our native sense of place.--Jonathon Keats, San Francisco Magazine With Unfathomable City, Solnit and Snedeker have produced an idiosyncratic, luminous tribute to the greatest human creation defined by its audience participants: the city itself.--Daniel Brook, New York Times