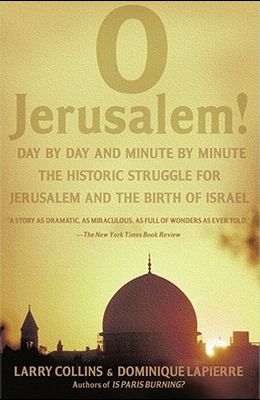 by
Larry Collins and Dominique Lapierre

Now a major motion picture, this remarkable classic recounts, moment by moment, the spellbinding process that gave birth to the state of Israel. Collins and Lapierre weave a brilliant tapestry of shattered hopes, fierce pride, and breathtaking valor as the Arabs, Jews, and British collide in their fight for control of Jerusalem. O Jerusalem meticulously re-creates this historic struggle. Collins and Lapierre penetrate the battle from the inside, exploring each party's interests, intentions, and concessions as the city of all of their dreams teeters on the brink of destruction. From the Jewish fighters and their heroic commanders to the charismatic Arab chieftain whose death in battle doomed his cause but inspired a generation of Palestinians, O Jerusalem tells the three-dimensional story of this high-stakes, emotional conflict. Now with a new introduction by Dominique Lapierre, O Jerusalem remains, as ever, a towering testament to the fiery dawn of Israel and an unforgettable tale of faith and violence, of betrayal and indomitable courage.

From the Back Cover Here is the classic retelling of the spellbinding events of the birth of Israel.