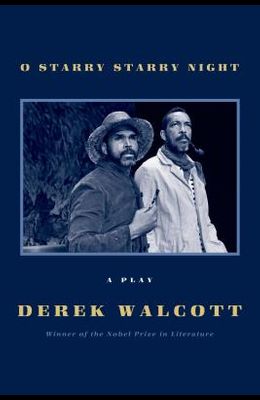 Two masterful artists--Gauguin and van Gogh--come alive in a vibrant drama about friendship, art, and madness Two painters--Paul Gauguin and Vincent van Gogh--are living together in the sleepy town of Arles in 1888. Soon, Gauguin, frustrated by van Gogh's refusal to acknowledge his increasingly troubled mind, will depart for Paris. In two years, van Gogh will be dead by his own hand. In the meantime, the friends discuss their craft; they frequent a local cafe that van Gogh will soon immortalize; they become acquainted with a young prostitute, Lotte, who becomes Gauguin's lover; they argue; they paint. In Derek Walcott's new historical play, O Starry Starry Night , two world-renowned artists come to life as they wrestle both with grand themes--friendship, loyalty, fame--and with more mundane concerns, money primary among them. The scenes Walcott sketches summon several of van Gogh's most famous paintings: Sunflowers , The Night Cafe , The Bedroom at Arles . His manipulation of language--van Gogh's eloquent monologues giving way to more abstract speeches--evokes the painter's descent into madness. Over the action hangs the threat of violence, of death, which lends the play a potent urgency; for at least one of the characters, time is quickly running out. O Starry Starry Night is powerfully wrought, and demonstrates once again the sharpness of Walcott's eye: as a painter, as a poet, as a writer, and, above all, as an observer of human follies, foibles, failings, and aspirations.

List of All Editions of O Starry Starry Night: A Play