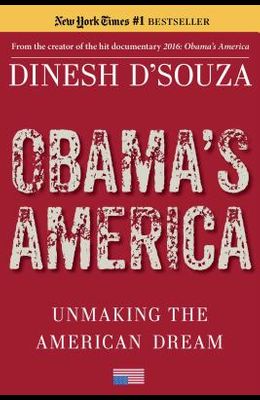 In this #1 New York Times bestselling book, Dinesh D'Souza, the creator of the second highest-grossing political documentary ever, 2016: Obama's America , lays out Obama's plans through the end of his second administration and warns us how he will harm the country. America as we know it--wealthy, powerful, assertive--is not what Obama wants. He wants a smaller America, a poorer America, an America unable to exert its will, an America happy to be one power among many, an America in decline so that other nations might rise--all in the name of global fairness. To Obama, the hated 1 percent isn't just wealthy Americas; it is America itself. In Obama's view, America needs to be taken down a notch. That is the startling conclusion of bestselling author Dinesh D'Souza in Obama's America . Building on his previous New York Times bestseller The Roots of Obama's Rage --which Newt Gingrich called stunning...the most profound insight I have read in the last six years--D'Souza shows how Obama's goal to downsize America is in plain sight but ignored by everyone. D'Souza lays out what Obama plans to do in a second administration--a makeover of America so drastic that the shining city on a hill will become a shantytown in a rather dangerous global village. Arresting in its presentation and sobering in its conclusions, Obama's America is essential reading for those who want to change America's course before it's too late.