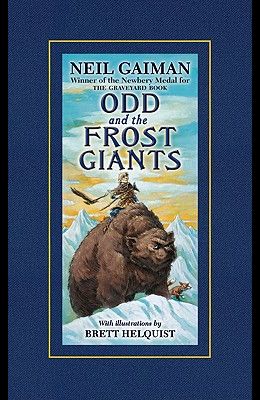 Odd and the Frost Giants

by
Neil Gaiman and Brett Helquist

Newbery Medalist Gaiman and illustrator Helquist team up for a new fantasy novella in which a young boy must free Asgard--the city of the gods--from the evil Frost Giants. Illustrations.

From the Back Cover In this inventive, short, yet perfectly formed novel inspired by traditional Norse mythology, Neil Gaiman takes readers on a wild and magical trip to the land of giants and gods and back. In a village in ancient Norway lives a boy named Odd, and he's had some very bad luck: His father perished in a Viking expedition; a tree fell on and shattered his leg; the endless freezing winter is making villagers dangerously grumpy. Out in the forest Odd encounters a bear, a fox, and an eagle--three creatures with a strange story to tell. Now Odd is forced on a stranger journey than he had imagined--a journey to save Asgard, city of the gods, from the Frost Giants who have invaded it. It's going to take a very special kind of twelve-year-old boy to outwit the Frost Giants, restore peace to the city of gods, and end the long winter. Someone cheerful and infuriating and clever . . . Someone just like Odd .