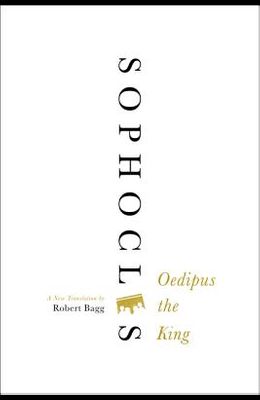 Book #1 in the The Theban Plays Series
by
Sophocles
$3.88
Select Format

Among the most celebrated plays of ancient Athens, Oedipus the King is one of seven surviving dramas by the great Greek playwright, Sophocles, now available from Harper Perennial in a vivid and dynamic new translation by award-winning poet Robert Bagg. Praised by Aristotle as the pinnacle of Greek drama, Oedipus the King is the ancient world's most shocking and memorable tragedy; the story of Thebes's resilient hero and his royal family brought to hellish ruin by fate, manipulation of the Olympian gods, and all-too-human weakness. This is Sophocles, vibrant and alive, for a new generation.

From the Back Cover Sophocles' most profound and celebrated play in a vivid and dynamic new translation by award-winning poet Robert Bagg Oedipus the King remains, after 2,500 years, a shocking, suspenseful, and highly emotional drama in which a royal family is brought to hellish ruin by fate, an inscrutable god, and the kindness of a stranger. Oedipus must find and destroy the murderer of his predecessor, King Laios, to rid Thebes of the plague caused by the killer's undetected and malignant presence. The play's headlong action resembles a tautly woven criminal investigation, but one whose immense stakes pose a host of wrenching and still unresolved questions: What constitutes human guilt? Why do gods punish the innocent? What are the limits of human intellect? Why do family bonds so often prove destructive? Robert Bagg's spare, idiomatic, and nuanced translation is ideally suited for reading, teaching, or performing. This is Sophocles for a new generation.

The Theban Plays Series In Order - By Sophocles