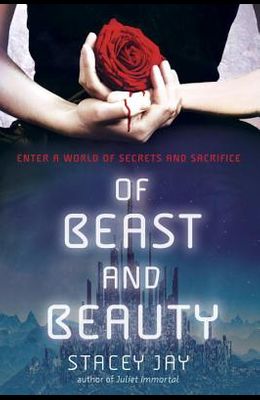 Of Beast and Beauty

What if Beauty became the Beast? Discover a new angle on the classic fairytale in this fantasy retelling that's perfect for anyone who can't get enough of Beauty and the Beast . In the city of Yuan, the blind Princess Isra is raised to be a human sacrifice. Her death will ensure her city's vitality. In the desert, a mutant beast named Gem fights to save his people, known as the Monstrous, from starvation. Neither dreams that, together, they can return balance to their worlds. When Gem is captured for trying to steal Yuan's enchanted roses, he becomes a prisoner of the city. Isra enlists his help, and soon begins to care for him--and to question everything she has been brought up to believe. . . . Engrossing tale . . . an] intense love story. -- Kirkus Reviews The bones of the classic Beauty and the Beast story are all here, imaginatively fleshed out with tropes from science fiction, fantasy, and even political drama. -- The Bulletin, Recommended Jay's characters are well-realized . . . the] setup is intriguing and her writing assured. -- Publishers Weekly Revelations and plot twists keep the action flowing and romance growing. . . . A satisfying read for fans of romantic fantasy. -- School Library Journal

Books similiar to Of Beast and Beauty

List of All Editions of Of Beast and Beauty