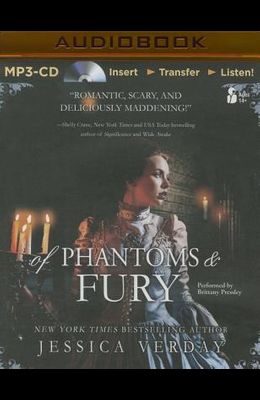 Of Phantoms and Fury

Book #2 in the Of Monsters and Madness Series
by
Jessica Verday and Brittany Pressley
$0.00
Select Format

In mourning after the sudden death of her grandfather, Annabel Lee is devastated when her beau, Allan Poe, commits himself to an insane asylum to keep his second personality--callous serial killer Edgar--at bay. In need of distraction, she eagerly accepts her father's invitation to help with his medical experiments. But his scientific study is rapidly morphing into morbid obsession. And Annabel's own attempts to cure Allan are becoming morally questionable. When Annabel begins receiving mysterious notes and then her father is kidnapped, she's left with little choice. She needs Edgar's help. The pair tracks the letters back to the dashing and quite dangerous Dorian Gray, who seems to know all about Annabel's past. The secrets he reveals force her to make a decision that may make her the most monstrous of all. This follow-up to Of Monsters and Madness deftly combines horror themes drawn from Robert Louis Stevenson's The Strange Case of Dr. Jekyll and Mr. Hyde , Oscar Wilde's The Picture of Dorian Gray , and Mary Shelley's Frankenstein to create a chilling Gothic thriller for a new era.

List of All Editions of Of Phantoms and Fury