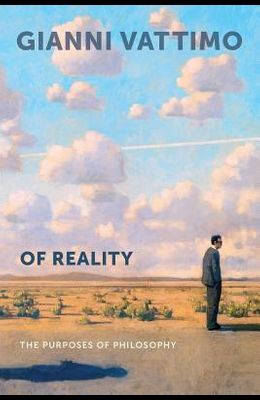 Of Reality: The Purposes of Philosophy

2 Out of 5
We search the most popular review sites and give you one score you can trust!

We think it is wise to accept reality, rather than fight for something that does not exist or might never be. But in Of Reality , Gianni Vattimo condemns this complacency, with its implicit support of the status quo. Instead he urges us to never stop questioning, contrasting, or overcoming reality, which is not natural, inevitable, or objective. Reality is a construct, reflecting, among other things, our greed, biases, and tendencies toward violence. It is no accident, Vattimo argues, that the call to embrace reality has emerged at a time when the inequalities of liberal capitalism are at their most extreme. Developed from his popular Gifford Lectures, this book advances a critical approach that recovers our interpretive powers and native skepticism toward normative claims. Though he recognizes his ideas invite charges of relativism, the philosopher counters with a discussion of truth, highlighting its longstanding ties to history and social circumstance. Truth is always contingent and provisional, and reason and reasonableness are bound to historical context. Truth is therefore never objective, and resistance to reality is our best hope to defeat the indifference that threatens the scope of freedom and democracy.