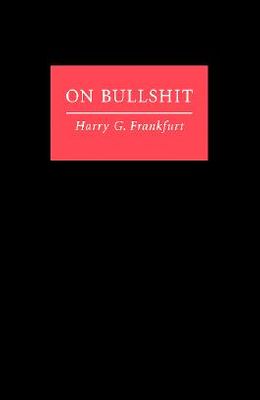 A #1 NEW YORK TIMES BESTSELLER One of the most salient features of our culture is that there is so much bullshit. Everyone knows this. Each of us contributes his share. But we tend to take the situation for granted. Most people are rather confident of their ability to recognize bullshit and to avoid being taken in by it. So the phenomenon has not aroused much deliberate concern. We have no clear understanding of what bullshit is, why there is so much of it, or what functions it serves. And we lack a conscientiously developed appreciation of what it means to us. In other words, as Harry Frankfurt writes, we have no theory. Frankfurt, one of the world's most influential moral philosophers, attempts to build such a theory here. With his characteristic combination of philosophical acuity, psychological insight, and wry humor, Frankfurt proceeds by exploring how bullshit and the related concept of humbug are distinct from lying. He argues that bullshitters misrepresent themselves to their audience not as liars do, that is, by deliberately making false claims about what is true. In fact, bullshit need not be untrue at all. Rather, bullshitters seek to convey a certain impression of themselves without being concerned about whether anything at all is true. They quietly change the rules governing their end of the conversation so that claims about truth and falsity are irrelevant. Frankfurt concludes that although bullshit can take many innocent forms, excessive indulgence in it can eventually undermine the practitioner's capacity to tell the truth in a way that lying does not. Liars at least acknowledge that it matters what is true. By virtue of this, Frankfurt writes, bullshit is a greater enemy of the truth than lies are.

From the Back Cover A gem of psychological insight, social commentary, philosophical analysis, and good humor. This is the work of an extraordinarily acute, attentive, and versatile philosopher who has succeeded in addressing an audience comprised of both other philosophers and the general public on a topic of considerable human interest in a characteristically wry and engaging way. It is one of the most enjoyable and humanly illuminating short pieces of philosophy produced in the past fifty years. --Raymond Geuss, University of Cambridge The most audacious of the ancient alchemists desired to transmute lead into gold. They never succeeded. Who would have known that they should have started not with a base metal, but with bullshit? Harry Frankfurt offers a philosophical analysis of bullshit that is golden. The prose by turns employs irony, broad humor, and tongue-in-cheek high seriousness while at the same time manages to have a rigorous logical coherence that is always impressive. One leaves the essay not merely thinking it was a delight. One leaves it realizing that one has engaged the accomplishment of a great analyst and thinker. --William Chester Jordan, Professor of History, Princeton University

Books similiar to On Bullshit