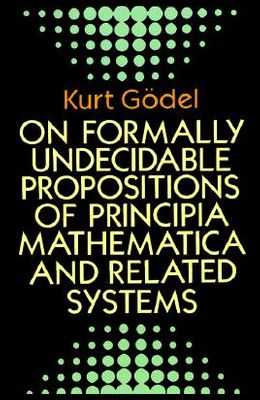 On Formally Undecidable Propositions of Principia Mathematica and Related Systems

In 1931, a young Austrian mathematician published an epoch-making paper containing one of the most revolutionary ideas in logic since Aristotle. Kurt Giidel maintained, and offered detailed proof, that in any arithmetic system, even in elementary parts of arithmetic, there are propositions which cannot be proved or disproved within the system. It is thus uncertain that the basic axioms of arithmetic will not give rise to contradictions. The repercussions of this discovery are still being felt and debated in 20th-century mathematics. The present volume reprints the first English translation of Giidel's far-reaching work. Not only does it make the argument more intelligible, but the introduction contributed by Professor R. B. Braithwaite (Cambridge University}, an excellent work of scholarship in its own right, illuminates it by paraphrasing the major part of the argument. This Dover edition thus makes widely available a superb edition of a classic work of original thought, one that will be of profound interest to mathematicians, logicians and anyone interested in the history of attempts to establish axioms that would provide a rigorous basis for all mathematics. Translated by B. Meltzer, University of Edinburgh. Preface. Introduction by R. B. Braithwaite.