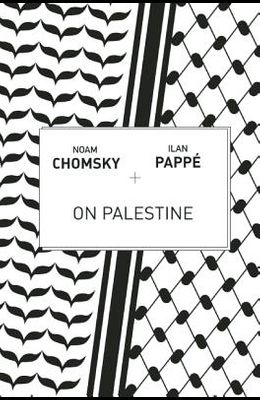 by
Noam Chomsky and Ilan Pappe and Frank Barat

Operation Protective Edge, Israel's most recent assault on Gaza, left thousands of Palestinians dead and cleared the way for another Israeli land grab. The need to stand in solidarity with Palestinians has never been greater. Ilan Pappe and Noam Chomsky, two leading voices in the struggle to liberate Palestine, discuss the road ahead for Palestinians and how the international community can pressure Israel to end its human rights abuses against the people of Palestine. On Palestine is the sequel to their acclaimed book Gaza in Crisis . Noam Chomsky is widely regarded to be one of the foremost critics of US foreign policy in the world. He has published numerous groundbreaking books, articles, and essays on global politics, history, and linguistics. Since 2003 he has written a monthly column for the New York Times syndicate. His recent books include Masters of Mankind and Hopes and Prospects . Haymarket Books recently released updated editions of twelve of his classic books. Ilan Pappe is the bestselling author of The Ethnic Cleansing of Palestine: A History of Modern Palestine and The Israel/Palestine Question . Frank Barat is a human rights activist and author. He was the coordinator of the Russell Tribunal on Palestine and is now the president of the Palestine Legal Action Network. His books include Freedom is a Constant Struggle , Gaza in Crisis , Corporate Complicity in Israel's Occupation , and On Palestine .