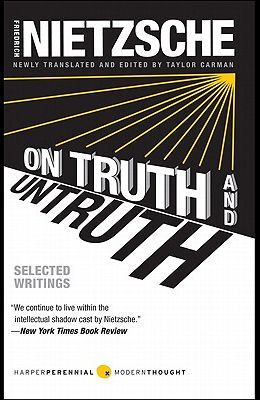 On Truth and Untruth: Selected Writings

We continue to live within the intellectual shadow cast by Nietzsche. -- New York Times Book Review Best known for his seminal works on religion, morality, existentialism, and contemporary culture, such as The Birth of Tragedy and Thus Spoke Zarathustra , Nietzsche focuses his penetrating insight on assessing the nature of truth in this concise and highly readable collection that charts the great philosopher's writings on truth. Joining Heidegger's Basic Writings , The Essential Schopenhauer , and other books in the Harper Perennial Modern Thought series, On Truth and Untruth offers unprecedented access to the most influential of the great philosophers ( New Yorker ).

From the Back Cover Newly translated and edited by Taylor Carman, On Truth and Untruth charts Nietzsche's evolving thinking on truth, which has exerted a powerful influence over modern and contemporary thought. This original collection features the complete text of the celebrated early essay On Truth and Lie in a Nonmoral Sense (a keystone in Nietzsche's thought -- Stanford Encyclopedia of Philosophy ), as well as selections from the great philosopher's entire career, including key passages from The Gay Science , Beyond Good and Evil , On the Genealogy of Morals , The Will to Power , Twilight of the Idols , and The Antichrist .