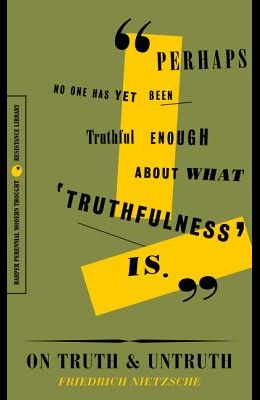 On Truth and Untruth: Selected Writings

We continue to live within the intellectual shadow cast by Nietzsche.-- New York Times Book Review Reissued for the age of fake news, On Truth and Untruth charts Nietzsche's evolving thinking on truth, which has exerted a powerful influence over modern and contemporary thought. This original collection features the complete text of the celebrated early essay On Truth and Lies in a Nonmoral Sense (a keystone in Nietzsche's thought-- Stanford Encyclopedia of Philosophy ), as well as selections from the great philosopher's entire career, including key passages from The Gay Science , Beyond Good and Evil , On the Genealogy of Morals , The Will to Power , Twilight of the Idols , and The Antichrist . In times of crisis, the great works of philosophy help us make sense of the world. The Harper Perennial Resistance Library is a special five-book series highlighting short classic works of independent thought that illuminate the nature of truth, humanity's dangerous attraction to authoritarianism, the influence of media and mass communication, and the philosophy of resistance--all critical in understanding today's politically charged world.