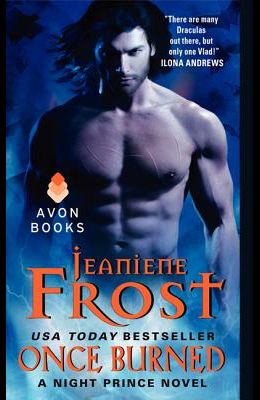 Once Burned: A Night Prince Novel

Book #9 in the Night Huntress Universe Series
by
Jeaniene Frost

An author who delivers only the best. -- Romantic Times Put Jeaniene Frost on your must-read list --Lara Adrian, New York Times bestselling author Spinning off from her wildly successful, New York Times bestselling Night Huntress novels featuring vampire soulmates Cat and Bones, Jeaniene Frost kicks off the thrilling new Night Prince series with Once Burned . Vlad Tepesh, the ruthless master vampire and inspiration for Bram Stoker's dark legend (but don't dare call him Dracula) encounters a mortal woman with unimaginable power... including the ability to enflame his cold heart. Paranormal romance and urban fantasy fans who hunger for the novels of Kim Harrison, Christine Feehan, and Charlaine Harris are going to love The Night Prince and this dark and steamy tale of supernatural attraction.

From the Back Cover She's a mortal cursed with dark power... After a tragic accident scarred her body and destroyed her dreams, Leila never imagined that the worst was still to come: a terrifying ability to channel electricity and to see a person's darkest secrets through a single touch. Leila is doomed to a life of solitude...until creatures of the night kidnap her, forcing her to reach out with a telepathic distress call to the world's most infamous vampire... He's the Prince of Night... Vlad Tepesh inspired the greatest vampire legend of all--but whatever you do, don't call him Dracula. Vlad's ability to control fire makes him one of the most feared vampires in existence, but his enemies have found a new weapon against him--a beautiful mortal with powers to match his own. When Vlad and Leila meet, however, passion ignites, threatening to consume them. It will take everything they have to stop an enemy intent on bringing them down in flames.