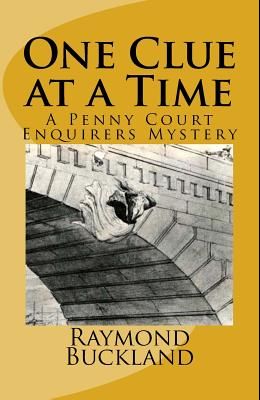 One Clue at a Time: A Penny Court Enquirers Mystery

In Victorian London, in 1886, Bertie Hawkins worked on the presses of The Morning Post for a number of years but lost his job when that tabloid was absorbed by a larger newspaper. Bertie was always interested in reading reports of the Metropolitan Police tracking down criminals and solving crimes but felt that in fact they did a very poor job of it. He decides that, being unemployed, now is his chance to see if he can do any better than the police. When he reads the account of how a young housewife has completely vanished from inside a pawnshop, Bertie starts The Penny Court Enquirers to show Scotland Yard how things should be done. His wife, Nellie, who controls the purse strings, insists that Bertie take his not-so-smart brother-in-law Arnold along with him on his adventures. They quickly leave Scotland Yard in their dust, even earning the approval of the Yard's own Inspector Moss. One Clue At a Time is the first of a series of three Victorian mysteries by Raymond Buckland. RAYMOND BUCKLAND is an internationally known, award-winning author. He has written more than fifty non-fiction works and eleven novels, translated into seventeen foreign languages. He has most recently been writing Victorian mysteries for Penguin/Random House in a series that received rave reviews from Publishers Weekly, Kirkus Reviews and others. His books have been translated into seventeen foreign languages. His books are listed at www.raymondbucklandbooks.com