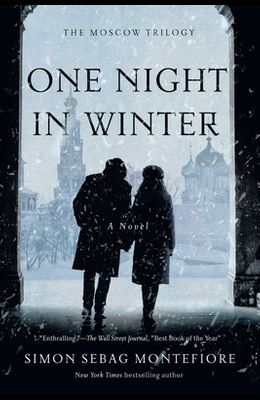 One Night in Winter

Book #3 in the Moscow Trilogy Series
by
Simon Sebag Montefiore

Inspired by a true story, New York Times bestselling author Simon Sebag Montefiore explores the consequences of forbidden love in this heartbreaking epic childhood, danger, and betrayal that unfolds during the bleak days after World War II. As Moscow celebrates the motherland's glorious victory over the Nazis, shots ring out on the crowded streets. On a nearby bridge, a teenage boy and girl--dressed in traditional nineteenth-century costumes--lie dead. But this is no ordinary tragedy, because these are no ordinary teenagers. They were the children of high-ranking Soviet officials. Was it an accident, or murder? Is it a conspiracy against Stalin, or one of his own terrifying intrigues? On Stalin's instructions, a ruthless investigation begins into what becomes known as the Children's Case. Youth across the city are arrested and forced to testify against their friends and their parents. As families are ripped apart, all kinds of secrets come spilling out. Trapped at the center of this witch-hunt are two pairs of illicit lovers, who learn that matters of the heart exact a terrible price. By turns a darkly sophisticated political thriller, a rich historical saga, and a deeply human love story, Montefiore's masterful novel powerfully portrays the terror and drama of Stalin's Russia.