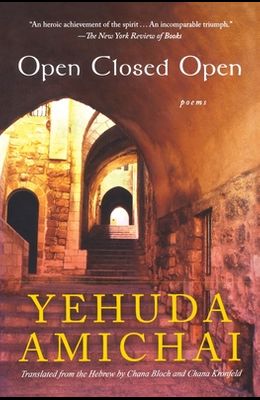 In poems marked by tenderness and mischief, humanity and humor, Yehuda Amichai breaks open the grand diction of revered Jewish verses and casts the light of his own experience upon them. Here he tells of history, a nation, the self, love, and resurrection. Amichai s last volume is one of meditation and hope, and stands as a testament to one of Israel s greatest poets. Open closed open. Before we are born, everything is open in the universe without us. For as long as we live, everything is closed within us. And when we die, everything is open again. Open closed open. That s all we are. from I WASN T ONE OF THE SIX MILLION: AND WHAT IS MY LIFE SPAN? OPEN CLOSED OPEN

From the Back Cover The last collection from one of the twentieth century's greatest poets Yehuda Amichai emigrated with his parents to Jerusalem in 1935. There he became one of the first poets to write in colloquial Hebrew, writing fourteen books and winning the Israel Prize in 1982. Open Closed Open was his last collection of poetry. It is a testament to all that he represented: the beauty and honor of living, the wonder and vibrancy of language, the transformative power of love. Praise for Yehuda Amichai and Open Closed Open Poets have always talked reverently about unlocking the human heart, but when I read Amichai I wonder who before him actually managed it.--Ted Hughes Amichai's splendid poems, refined and cast in the desperate foundries of the Middle East, where life and faith are always at stake, exhibit a majestic and Biblical range of the topography of the soul.--Anthony Hecht It is the dream of most poets to become a vox populi . . . Yehuda Amichai is one.-- The New York Times Book Review Once one has read [Amichai's] poems, one can never forget them--there can be so much life and truth in sixteen lines. Amichai is a master.--Octavio Paz YEHUDA AMICHAI (1924-2000) is considered one of the great poets of the twentieth century. The recipient of numerous awards, his work has been translated into more than thirty-seven languages. CHANA BLOCH is the author of three books of poems. She lives in California. CHANA KRONFELD is professor of Hebrew, Yiddish, and comparative literature at the University of California, Berkeley. She lives in California.