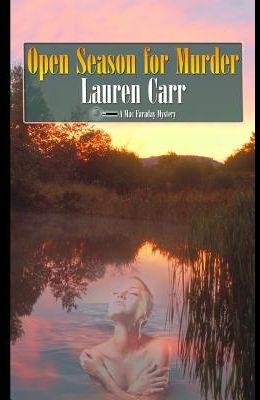 Book #10 in the Mac Faraday Mystery Series
by
Lauren Carr

Robin? It's me, Ashton. Spring is in the air. In Deep Creek Lake, the burst of blossoms on the trees has the effect of a starting pistol in the race to get the resort area ready in time for the seasonal residents return to Spencer, Maryland. In this latest Mac Faraday Mystery, Lauren Carr once again brings murder to the Spencer Inn, Mac Faraday's five-star resort located at the top of Spencer Mountain. I have to confess, the author says, personally I would wonder how the Spencer Inn hangs on to their five-star rating with all the murders that happen there. Obviously, the high society guests in her book aren't worried about the Spencer Inn's mortality rate because they're dying to attend the Diablo Ball, which is hosted by Mac Faraday's new bride, Archie Monday. An annual charitable event to benefit the Humane Society, the Diablo Ball used to be hosted by Robin Spencer, Mac's late mother, and would kick-off Deep Creek Lake's summer season. As readers have come to expect from every Lauren Carr mystery, Open Season for Murder delivers a punch even before the party invitations are put in the mail when uninvited guests begin RSVP'ing. Intrigued by a mysterious phone call, retired homicide detective Mac Faraday can't resist diving into the cold case of Ashton Piedmont, a young woman who had disappeared into the moonlit waters of Deep Creek Lake five years earlier. Mac quickly discovers that not only is the Diablo Ball drawing in A-listers from across the country, but someone is going to a lot of trouble to gather together suspects and witnesses connected to Ashton Piedmont and each one seems to have their own agenda for coming to Spencer. When murder strikes, it is up to Mac Faraday and his friends to find the killer ... or is it killers? When it comes to murder in Deep Creek Lake, you never know. But readers do know this, if it's happening at the Spencer Inn, you know it's an event to die for