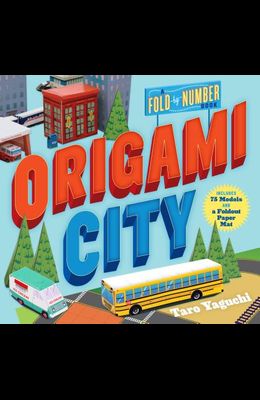 by
Taro Yaguchi and Simon Arizpe

Introducing fold-by-number origami, a revolutionary new concept in paper folding. Created by the founder of Taro's Origami Studio, Origami Neighborhood marries the joy of paper folding with the foolproof appeal of paint by number and the imaginative play of LEGO or Playmobil. This ingenious book is an all-in-one kit for a complete origami metropolis: 75 realistic pieces to fold with step-by-step instructions; an illustrated paper play mat; and over 200 sheets of preprinted origami paper with numbers and lines for folding. The models--houses, office buildings, cars, emergency and construction vehicles, an airport, even dogs and squirrels to run in the parks--are meticulously detailed, illustrated by Brooklyn-based artist Simon Arizpe.