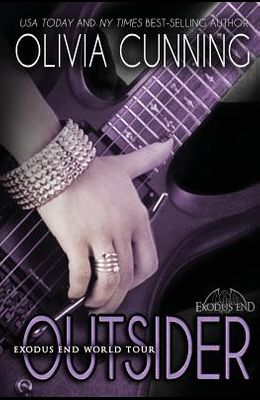 Book #2 in the Exodus End Series
by
Olivia Cunning

The tabloids claim she's cheating on her rock star boyfriend with her sexy bodyguard, but the truth is far more scandalous. Reagan Elliot should be living her dream... She's touring with Exodus End as their new rhythm guitarist and gaining more notoriety and fame than she ever imagined possible. She's earned the devoted love of not only one, but two spectacular men. Her committed threesome with sexy guitarist Trey Mills and her hunky bodyguard Ethan Conner is stable, loving, deep, and satisfying for all involved. But sometimes the world sees things differently and is determined to destroy what it doesn't understand. Can Reagan's relationship with Trey and Ethan survive the cruel backlash of the media, her family, and a bigoted public? Or will the talented musician lose everything she holds dear in the face of her own burgeoning doubts? Outsider is the second book in the Exodus End World Tour series. It's also the sequel to Double Time, the fifth book in the Sinners on Tour series.