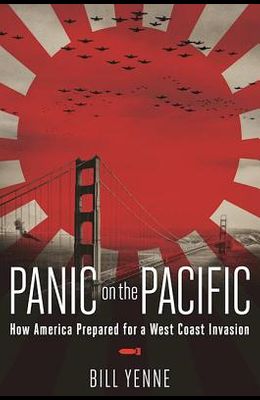 Panic on the Pacific: How America Prepared for the West Coast Invasion

The aftershocks of the December 7, 1941 attack on Pearl Harbor were felt keenly all over America--the war in Europe had hit home. But nowhere was American life more immediately disrupted than on the West Coast, where people lived in certain fear of more Japanese attacks. From that day until the end of the war, a dizzying mix of battle preparedness and rampant paranoia swept the states. Japanese immigrants were herded into internment camps. Factories were camouflaged to look like small towns. The Rose Bowl was moved to North Carolina. Airport runways were so well hidden even American pilots couldn't find them. There was panic on the Pacific coast: the Japanese were coming.

From the front Cover The Japanese attack on Pearl Harbor shocked America--but nowhere was that shock more profound than on the West Coast, where a Japanese invasion might be imminent. The Japanese were there all right--in submarines--but the greatest immediate threat, as President Franklin Roosevelt had said, was fear itself. That fear radiated down the chain of command to civilians for whom the chief danger was fatal accidents during blackouts. Most readers know that Japanese-Americans were interned because of a feared fifth column of collaborators, but few know how California, Oregon, and Washington were braced for a full-scale Japanese assault. Now popular military historian Bill Yenne tells the whole amazing story of the frantic preparations for the great invasion that never happened. In Panic on the Pacific you'll learn: How the American military disguised airport runways--sometimes so effectively that even American pilots couldn't find them Why American commanders thought the Japanese might launch air raids against San Francisco and Los Angeles How the threat of Japanese air attack resulted in the Rose Bowl football game moving from Pasadena to North Carolina Why America's Pacific coast was a tempting target for the Japanese--and a potential nightmare for American commanders What might have happened had the Japanese actually invaded Extensively researched and filled with lively anecdotes, Yenne's Panic on the Pacific illuminates one of the most remarkable untold stories of World War II.

Books similiar to Panic on the Pacific: How America Prepared for the West Coast Invasion

List of All Editions of Panic on the Pacific: How America Prepared for the West Coast Invasion