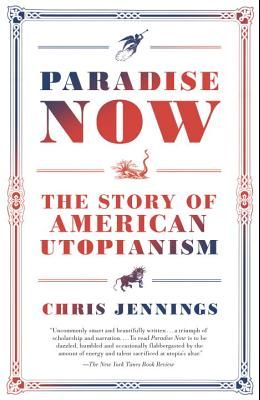 For readers of Jill Lepore, Joseph J. Ellis, and Tony Horwitz comes a lively, thought-provoking intellectual history of the golden age of American utopianism--and the bold, revolutionary, and eccentric visions for the future put forward by five of history's most influential utopian movements. In the wake of the Enlightenment and the onset of industrialism, a generation of dreamers took it upon themselves to confront the messiness and injustice of a rapidly changing world. To our eyes, the utopian communities that took root in America in the nineteenth century may seem ambitious to the point of delusion, but they attracted members willing to dedicate their lives to creating a new social order and to asking the bold question What should the future look like? In Paradise Now, Chris Jennings tells the story of five interrelated utopian movements, revealing their relevance both to their time and to our own. Here is Mother Ann Lee, the prophet of the Shakers, who grew up in newly industrialized Manchester, England--and would come to build a quiet but fierce religious tradition on the opposite side of the Atlantic. Even as the society she founded spread across the United States, the Welsh industrialist Robert Owen came to the Indiana frontier to build an egalitarian, rationalist utopia he called the New Moral World. A decade later, followers of the French visionary Charles Fourier blanketed America with colonies devoted to inaugurating a new millennium of pleasure and fraternity. Meanwhile, the French radical Etienne Cabet sailed to Texas with hopes of establishing a communist paradise dedicated to ideals that would be echoed in the next century. And in New York's Oneida Community, a brilliant Vermonter named John Humphrey Noyes set about creating a new society in which the human spirit could finally be perfected in the image of God. Over time, these movements fell apart, and the national mood that had inspired them was drowned out by the dream of westward expansion and the waking nightmare of the Civil War. Their most galvanizing ideas, however, lived on, and their audacity has influenced countless political movements since. Their stories remain an inspiration for everyone who seeks to build a better world, for all who ask, What should the future look like? Praise for Paradise Now Uncommonly smart and beautifully written . . . a triumph of scholarship and narration: five stand-alone community studies and a coherent, often spellbinding history of the United States during its tumultuous first half-century . . . Although never less than evenhanded, and sometimes deliciously wry, Jennings writes with obvious affection for his subjects. To read Paradise Now is to be dazzled, humbled and occasionally flabbergasted by the amount of energy and talent sacrificed at utopia's altar. -- The New York Times Book Review Writing an impartial, respectful account of these philanthropies and follies is no small task, but Mr. Jennings largely pulls it off with insight and aplomb. Indulgently sympathetic to the utopian impulse in general, he tells a good story. His explanations of the various reformist credos are patient, thought-provoking and . . . entertaining. -- The Wall Street Journal As a tour guide, Jennings is thoughtful, engaging and witty in the right doses. . . . He makes the subject his own with fresh eyes and a crisp narrative, rich with detail. . . . In the end, Jennings writes, the communards' disregard for the world as it exists sealed their fate. But in revisiting their stories, he makes a compelling case that our present-day 'deficit of imagination' could be similarly fated. -- San Francisco Chronicle From the Hardcover edition.