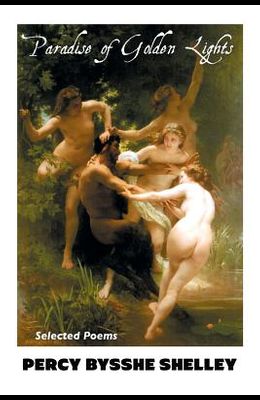 PERCY BYSSHE SHELLEY: PARADISE OF GOLDEN LIGHTS: SELECTED POEMS A selection of the odes, hymns and paeans of England's breathless, angelic, anarchic poet. Famous poems, such as 'Ode to the West Wind' and 'The Cloud', are set beside extracts from Prometheus Unbound and Epipsychidion. New poems and new illustrations have been added to this edition. Percy Shelley is one of the 'major' British poets, seen by many people as the breathless, hyperlyrical, angelic yet anarchic poet of the Romantic era, out-doing Lord Byron and John Keats in terms of sheer brilliance. His personality, as with Keats and Byron, is a crucial component in the Shelley legend. For Shelley has a cult built up around him, and his life is so much more colourful than, say, Thomas Hardy's or Philip Larkin's lives. For Shelley, as for so many other Romantic poets, poetry expands life, renews and replenishes life. In 'A Defence of Poetry'. Shelley wrote: 'Poetry enlarges the circumference of the imagination by replenishing it with thoughts of ever new delight, which have the power of attracting and assimilating to their own nature all other thoughts, and which form intervals and interstices whose void forever craves fresh food.' Shelley, as for Keats, Goethe, Novalis and other Romantic poets, the poet was something of a shaman, a magician who can conjure up astonishing experiences. Shelley writes that 'Poetry lifts the veil from the hidden beauty of the world and makes familiar objects be as if they were not familiar'. For Shelley, poetry enlarges experience of the world, so that things come alive. For him, poets are shamans, not prophets, but magicians. 'A poet participates in the eternal, the infinite, and the one', says Shelley Shelley's poet creates also for companionship, singing like a nightingale in the darkness. 'A poet is a nightingale, who sits in darkness and sings to its own solitude with sweet sounds', he wrote. Illustrated. Introduction and bibliography. New poems have been added to this edition, plus a new picture gallery of images of Shelley and his art. www.crmoon.com