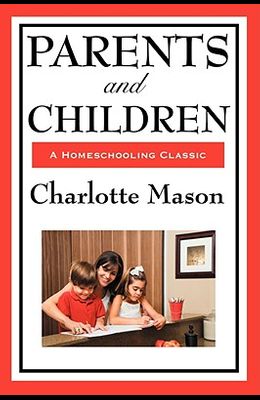 Book #2 in the Original Homeschooling Series
by
Charlotte Mason

Parents and Children consists of a collection of 26 articles from the original Parent's Review magazines to encourage and instruct parents. Topics include The Family; Parents as Rulers; Parents as Inspirers; Parents as Schoolmasters; The Culture of Character; Parents as Instructors in Religion; Faith and Duty (a secular writer has useful suggestions for using myths and stories to teach morals; along with the Bible, these can give examples of noble characters to emulate); Parents' Concern to Give the Heroic Impulse; Is It Possible?; Discipline; Sensations and Feelings Educable by Parents; What is Truth? (Dealing with Lying); Show Cause Why; A Scheme Of Educational Theory; A Catechism of Educational Theory; Whence and Whither; The Great Recognition Required of Parents; and The Eternal Child. Charlotte Mason was a late nineteenth-century British educator whose ideas were far ahead of her time. She believed that children are born persons worthy of respect, rather than blank slates, and that it was better to feed their growing minds with living literature and vital ideas and knowledge, rather than dry facts and knowledge filtered and pre-digested by the teacher. Her method of education, still used by some private schools and many homeschooling families, is gentle and flexible, especially with younger children, and includes first-hand exposure to great and noble ideas through books in each school subject, conveying wonder and arousing curiosity, and through reflection upon great art, music, and poetry; nature observation as the primary means of early science teaching; use of manipulatives and real-life application to understand mathematical concepts and learning to reason, rather than rote memorization and working endless sums; and an emphasis on character and on cultivating and maintaining good personal habits. Schooling is teacher-directed, not child-led, but school time should be short enough to allow students free time to play and to pursue their own worthy interests such as handicrafts. Traditional Charlotte Mason schooling is firmly based on Christianity, although the method is also used successfully by secular families and families of other religions.