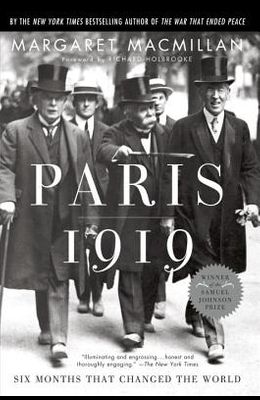 This prize-winning national bestseller is the landmark, personality-filled history of the Paris peace conference of 1919, now in paperback.

From the front Cover National Bestseller New York Times Editors' Choice Winner of the PEN Hessell Tiltman Prize Winner of the Duff Cooper Prize Silver Medalist for the Arthur Ross Book Award of the Council on Foreign Relations Finalist for the Robert F. Kennedy Book Award For six months in 1919, after the end of the war to end all wars, the Big Three--President Woodrow Wilson, British prime minister David Lloyd George, and French premier Georges Clemenceau--met in Paris to shape a lasting peace. In this landmark work of narrative history, Margaret MacMillan gives a dramatic and intimate view of those fateful days, which saw new political entities--Iraq, Yugoslavia, and Palestine, among them--born out of the ruins of bankrupt empires, and the borders of the modern world redrawn.

List of All Editions of Paris 1919: Six Months That Changed the World