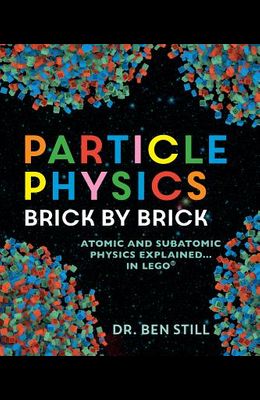 A simple and entertaining introduction to the building blocks of the universe. In 2014 the Lego(R) Group sold 62 billion Lego(R) pieces. That's 102 Lego(R) bricks for every person in the world. That's nothing however to the estimated seven billion billion billion atoms that make up each of us, let alone the between ten quadrillion vigintillion and one-hundred thousand quadrillion vigintillion atoms in the known observable universe. Thankfully, understanding atomic and subatomic physics need not be infathomable. Lego(R) bricks are a great way to visualize the blueprint of the Universe, right down to its smallest elements. Particle Physics Brick by Brick explains how and with what the universe came to be. It introduces the Standard Model of Physics, the rule book of physics which has been proven correct again and again since its mid-20 century development. Today, it is the gaps in the model that keep physicists busy. In concise chapters, the book assigns to each atomic element a colored Lego(R) brick, such as neutrons, leptons, and quarks. By assembling actual or imaginary bricks and observing their relationships and interactions, particle physics becomes clear. The book opens with the Standard Model of Physics, the physicists and the discoveries made over history, and directions on how to use the book. The chapters that follow are: Building Blocks and Construction Rules Building a Universe Electromagnetism and QED (Quantum ElectroDynamics) The Strong Force and QCD (Quantum ChromoDynamics) The Weak Force and Breaking Symmetries Broken Symmetry and Mass Problems with Ghosts Violated Symmetry The Future. Particle Physics Brick by Brick is a succinct introduction for anyone that wants to gain a basic understanding of the atomic world, its elements and how they interact. By using tangible substitutes -- bricks -- it brings the unseen atomic world into the realm of the visual.