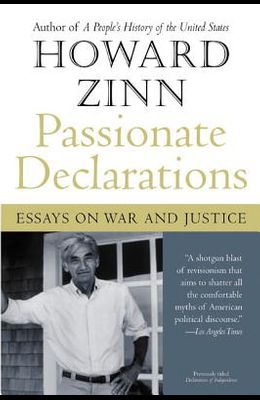 From the best-selling author of A People's History of the United States comes Passionate Declarations, a collection of essays that dares to challenge America's political ideology. Acclaimed author and activist Howard Zinn unveils the ugly truths behind what we have come to accept as the status quo, and turns what he calls American Orthodoxies on their head. Zinn argues that these orthodoxies can affect our capacity to think independently and to become active citizens in the long struggle for peace and justice. Among the many topics Zinn takes on are Vietnam and the question of just and unjust wars; intrusions on our Constitutional rights to privacy and free speech; the history of inequitable taxation; injustice to blacks; and indifference to pervasive poverty. Often drawing on personal experience, Zinn describes how our own government has betrayed the trust of its citizens. Passionate Declarations is a clarion call for independent thinking and action on the part of all Americans. Howard Zinn (1922-2010) was a historian, playwright, and activist. He wrote the classic A People's History of the United States, which has sold more than two million copies and was featured in a documentary on the History Channel. His other writings include the play Marx in Soho and his autobiography You Can't Be Neutral on a Moving Train. He received the Lannan Foundation Literary Award for Nonfiction and the Eugene V. Debs award for his writing and political activism. A shotgun blast of revisionism that aims to shatter all the comfortable myths of American political discourse. -- Los Angeles Times