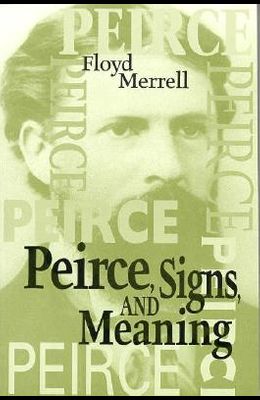 C.S. Peirce was the founder of pragmatism and a pioneer in the field of semiotics. His work investigated the problem of meaning, which is the core aspect of semiosis as well as a significant issue in many academic fields. Floyd Merrell demonstrates throughout Peirce, Signs, and Meaning that Peirce's views remain dynamically relevant to the analysis of subsequent work in the philosophy of language. Merrell discusses Peirce's thought in relation to that of early twentieth-century philosophers such as Frege, Russell, and Quine, and contemporaries such as Goodman, Putnam, Davidson, and Rorty. In doing so, Merrell demonstrates how quests for meaning inevitably fall victim to vagueness in pursuit of generality, and how vagueness manifests an inevitable tinge of inconsistency, just as generalities always remain incomplete. He suggests that vagueness and incompleteness/generality, overdetermination and underdetermination, and Peirce's phenomenological categories of Firstness, Secondness, and Thirdness must be incorporated into notions of sign structure for a proper treatment of meaning. He also argues that the twentieth-century search for meaning has placed overbearing stress on language while ignoring nonlinguistic sign modes and means. Peirce, Signs, and Meaning is an important sequel to Merrell's trilogy, Signs Becoming Signs' , Semiosis in the Postmodern Age, and Signs Grow . This book is not only a significant contribution to the field of semiotics, it has much to offer scholars in literature, philosophy, linguistics, cultural studies, and other academic disciplines in which meaning is a central concern.