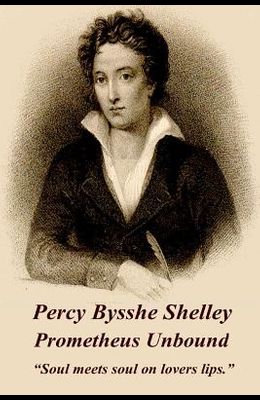 Shelley is one of the most revered figures in the English poetical landscape. Born on the 4th August 1792 he has, over the years, become rightly regarded as a major Romantic poet. Yet during his own lifetime little of his work was published. Publishers feared his radical views and possible charges against themselves for blasphemy and sedition. On 8th July 1822 a month before his 30th birthday, during a sudden storm, his tragic early death by drowning robbed our culture of many fine expected masterpieces. But in his short spell on earth he weaved much magic. Whilst Prometheus Unbound is a four act lyric play it was not written to be performed as a play but staged within the imagination of the reader. It is a reply to Aeschylus' Prometheus Bound which has the hero stealing fire from the gods to give to mortals. Many think this work is Shelley's masterpiece as it represents a culmination of the poet's political thought and displays his considerable gift of lyrical expression. The play was written over 4 years as its progress was severely impeded by the tragic death of first his daughter Clara Everina in 1818 and then his son William in 1819. The fourth act, a warning that evil must be checked lest tyranny reign, was added many months after the first three had been completed and revised. Shelley compares his Prometheus to Milton's Satan in Paradise Lost: But Prometheus is, as it were, the type of the highest perfection of moral and intellectual nature, impelled by the purest and the truest motives to the best and noblest ends.