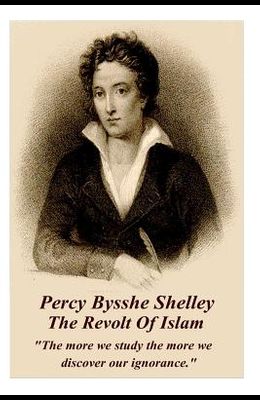 Percy Bysshe Shelley - The Revolt of Islam: the More We Study the More We Discover Our Ignorance.

Shelley is one of the most revered figures in the English poetical landscape. Born on the 4th August 1792 he has, over the years, become rightly regarded as a major Romantic poet. Yet during his own lifetime little of his work was published. Publishers feared his radical views and possible charges against themselves for blasphemy and sedition. On 8th July 1822 a month before his 30th birthday, during a sudden storm, his tragic early death by drowning robbed our culture of many fine expected masterpieces. But in his short spell on earth he weaved much magic. The Revolt of Islam: A Poem in 12 Cantos has little to do with Islam although is set within the Ottoman Empire but focuses more on revolutionary themes of social reform and anti religious sentiments that were inspired by the French Revolution. It was composed in 1817 and consists of nearly 5,000 lines written in Spenserian stanzas, namely verses of nine lines with 8 of iambic pentameter and the final line in iambic hextameter. The publishers, Charles and James Ollier, refused to print the work without changes to the statements on religion and the dilution of the incest within the poem. Shelley also changed the title and said of the poem that: I felt that it was in many respects a genuine picture of my own mind. I felt that the sentiments were true, not assumed. And in this have I long believed that my power consists; in sympathy and that part of the imagination which relates to sentiment and contemplation.