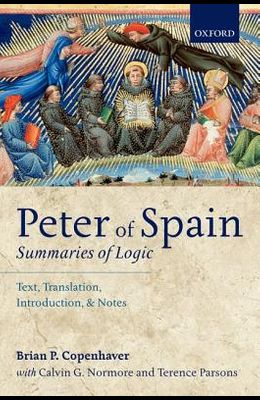 For nearly four centuries, when logic was the heart of what we now call the undergraduate curriculum, Peter of Spain's Summaries of Logic (c. 1230) was the basis for teaching that subject. Because Peter's students were teenagers, he wrote simply and organized his book carefully. Since no book about logic was read by more people until the twentieth century, the Summaries has extensively and profoundly influenced the distinctly Western way of speaking formally and writing formal prose by constructing well-formed sentences, making valid arguments, and refuting and defending arguments in debate. Some books, like the Authorized Version of the English Bible and the collected plays of Shakespeare, have been more influential in the Anglophone world than Peter's Summaries--but not many. This new English translation, based on an update of the Latin text of Lambertus De Rijk, comes with an extensive introduction that deals with authorship, dating, and the place of the Summaries in the development of logic, before providing a chapter-by-chapter analysis of Peter's book, followed by an analysis of his system from the point of view of modern logic. The Latin text is presented on facing pages with the English translation, accompanied by notes, and the book includes a full bibliography.