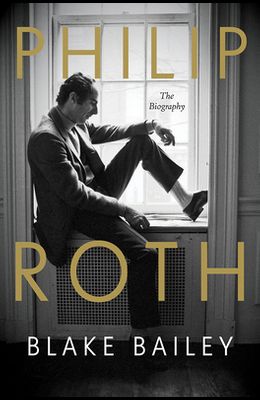 Appointed by Philip Roth and granted independence and complete access, Blake Bailey spent years poring over Roth's personal archive, interviewing his friends, lovers, and colleagues, and engaging Roth himself in breathtakingly candid conversations. The result is an indelible portrait of an American master and of the postwar literary scene. Bailey shows how Roth emerged from a lower-middle-class Jewish milieu to achieve the heights of literary fame, how his career was nearly derailed by his catastrophic first marriage, and how he championed the work of dissident novelists behind the Iron Curtain. Bailey examines Roth's rivalrous friendships with Saul Bellow, John Updike, and William Styron, and reveals the truths of his florid love life, culminating in his almost-twenty-year relationship with actress Claire Bloom, who pilloried Roth in her 1996 memoir, Leaving a Doll's House . Tracing Roth's path from realism to farce to metafiction to the tragic masterpieces of the American Trilogy, Bailey explores Roth's engagement with nearly every aspect of postwar American culture.

From the Back Cover Additional Praise for Blake Bailey's Philip Roth : A colorful, confident and uncompromising biographical triumph that, at more than 800 pages, also manages to be conversationally readable. ... no one writing about Roth will be able to sidestep this foundational biography. -- Alexander C. Kafka, Washington Post Magnificent ... Roth's biography is a book Bailey seemed destined to write. --Bryan Appleyard, Times of London Roth would approve of this biography, too, not because it's partial but because Bailey's industriousness is on a par with his own ... it's a miracle that he has published so lucid a book just three years after Roth's death?and one so packed with good anecdotes and jokes. -- Blake Morrison, The Guardian [A] totemic and compulsively readable biography. -- Christian Lorentzen, Bookforum 'Magisterial' and 'definitive' ... don't do justice to Blake Bailey's years-in-the-making opus. ... Bailey meticulously conjures the career of one of America's literary titans, the devils and angels that shaped his work. -- O, The Oprah Magazine Philip Roth, for all his flaws, for all that I know his legacy will continue to be judged in judgmental times and found wanting, deserves this riveting, serious and deeply intelligent biography. -- David Baddiel, The Spectator Blake Bailey has done an absolutely superb job with the masses of material he had to work with, and with a very controlling subject. He manages to strike a sane and equable tone, and while he demonstrates a certain sympathy for Roth, he is nobody's fool. The result is a detailed portrait of a man who is self-obsessed but generous and often kind; full of bile, yet, to many people, the funniest man they ever met; a devoted friend to many, an equally fervent foe to many others. -- Brooke Allen, The New Criterion Bailey has written the finest biography of his stellar career, striking a balance between Roth's life and work, and he has meticulously traced the connections between the two with shrewdness, skill and sympathy. Yes, the preeminent novelist of frailty, carnality and mortality, the serial adulterer who picked up women in elevators, the writer who quarreled with critics, Philip Roth, lives. -- David Biespiel, Houston Chronicle Rich-ly tex-tured ... rev-e-la-to-ry ... Philip Roth con-jures the intel-lec-tu-al-ly over-pow-er-ing, sex-u-al-ly omniv-o-rous, wound-ed, hilar-i-ous, mon-u-men-tal lit-er-ary fig-ure as ful-ly as possible. -- Donald Weber, Jewish Book Council A magnificent book--sedulous, scrupulous, fair-minded, reassuringly elegant in tone--everything Roth ... could have hoped for. -- Christopher Bray, The Critic Magisterial. -- Eric Cortellessa, Washington Monthly Well-researched and engrossing. -- Mark Athitakis, USA Today Voluminously researched, good-humored, and honestly written. Readers will discover new information about Roth's personal life and probably even learn about written works of his that they didn't know existed. -- Dan Kubis, Pittsburgh Post-Gazette Blake Bailey's biography of Philip Roth is that rare sort of book, meticulous without sacrificing dramatic energy, endlessly entertaining without ever surrendering critical integrity, candid without forfeiting compassion. ... He presents Roth's life and books with grace and unflinching honesty, connecting the man to the work in a way that makes each more compelling as the story proceeds. ... This book is not the tip of the iceberg but the iceberg itself. -- Michael Pearson, Virginian-Pilot Compelling and sympathetic ... wonderfully engaging ... Bailey's many extended interviews with Roth and others supplement his research which the biographer weaves expertly so that we see, as Roth proclaims, how Art is Life ... a riveting read of a great American master. -- Paul Perry, Irish Independent Fascinating ... Bailey's utterly engrossing biography shows Roth led a life just as strange and intense as his fictionalized alter egos. -- Tomiwa Owolade, Evening Standard Blake Bailey's book is definitive. It's also often funny, sometimes appalling, and always fascinating--like its subject. -- Jacqueline Cutler, New York Daily News A stunning feat, this is as dynamic and gripping as any of Roth's own fictions. -- Publishers Weekly (starred review) Excellent ... evenhanded ... Roth gave Bailey access to his archive and sat down for interviews, and it shows, especially in the many intimate details about Roth's personal life ... An outstanding biography. -- Kirkus (starred review) Fully authorized, comprehensive, and engrossing ... a consummate and unforgettable biography of a controversial, virtuoso, and indelible American writer. -- Booklist (starred review) Everything you ever wanted to know about Philip Roth you can discover in his novels. Everything you ever wanted to know about what it took to become one of the greatest American writers of our time, you will find in Blake Bailey's breathtaking biography. -- Nicole Krauss Philip Roth, to go with his legendary talent, was a lucky man. That streak continues with Blake Bailey's charming, wise, and witty biography, which achieves a balance and comprehensiveness that shouldn't have been possible so soon after Roth's death. -- Jonathan Lethem

0
|   0  reviews
Did you read Philip Roth: The Biography? Please provide your feedback and rating to help other readers.
Write Review

List of All Editions of Philip Roth: The Biography