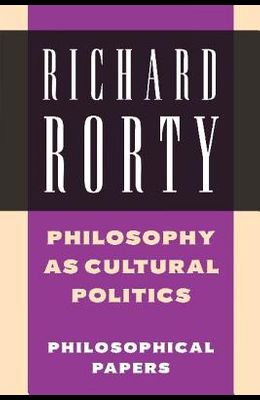 This volume presents a selection of the philosophical papers which Richard Rorty has written over the past decade, and complements three previous volumes of his papers: Objectivity, Relativism, and Truth, Essays on Heidegger and Others and Truth and Progress. Topics discussed include the changing role of philosophy in Western culture over the course of recent centuries, the role of the imagination in intellectual and moral progress, the notion of 'moral identity', the Wittgensteinian claim that the problems of philosophy are linguistic in nature, the irrelevance of cognitive science to philosophy, and the mistaken idea that philosophers should find the 'place' of such things as consciousness and moral value in a world of physical particles. The papers form a rich and distinctive collection which will appeal to anyone with a serious interest in philosophy and its relation to culture.

List of All Editions of Philosophy as Cultural Politics