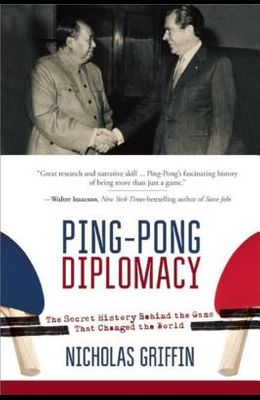 Ping-Pong Diplomacy: The Secret History Behind the Game That Changed the World

The spring of 1971 heralded the greatest geopolitical realignment in a generation. After twenty-two years of antagonism, China and the United States suddenly moved toward a d tente--achieved not by politicians but by Ping-Pong players. The Western press delighted in the absurdity of the moment and branded it Ping-Pong Diplomacy. But for the Chinese, Ping-Pong was always political, a strategic cog in Mao Zedong's foreign policy. Nicholas Griffin proves that the organized game, from its first breath, was tied to Communism thanks to its founder, Ivor Montagu, son of a wealthy English baron and spy for the Soviet Union. Ping-Pong Diplomacy traces a crucial inter-section of sports and society. Griffin tells the strange and tragic story of how the game was manipulated at the highest levels; how the Chinese government helped cover up the death of 36 million peasants by holding the World Table Tennis Championships during the Great Famine; how championship players were driven to their deaths during the Cultural Revolution; and, finally, how the survivors were reconvened in 1971 and ordered to reach out to their American counterparts. Through a cast of eccentric characters, from spies to hippies and Ping-Pong-obsessed generals to atom-bomb survivors, Griffin explores how a neglected sport was used to help realign the balance of worldwide power. Skyhorse Publishing, as well as our Arcade imprint, are proud to publish a broad range of books for readers interested in history--books about World War II, the Third Reich, Hitler and his henchmen, the JFK assassination, conspiracies, the American Civil War, the American Revolution, gladiators, Vikings, ancient Rome, medieval times, the old West, and much more. While not every title we publish becomes a New York Times bestseller or a national bestseller, we are committed to books on subjects that are sometimes overlooked and to authors whose work might not otherwise find a home.