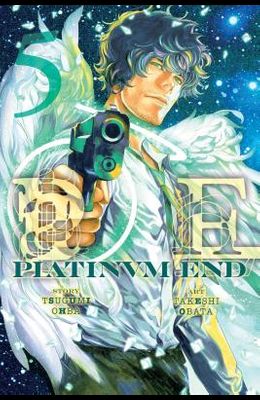 From the creators of Death Note Mirai may have been saved by an angel, but his battle is just beginning... As his classmates celebrate their middle school graduation, troubled Mirai is mired in darkness. But his battle is just beginning when he receives some salvation from above in the form of an angel. Now Mirai is pitted against 12 other chosen humans with the winner becoming the next god of the world. Mirai may have an angel in his corner, but he may need to become a devil to survive. With Saki having finally gotten over her trauma, the only thing holding her back now is the lack of angel wings. But perhaps theres a way for her to gain a pair of her own. Then, Mirai and his team will need all the help they can get when a new god candidate appears--one who wields a samurai sword

List of All Editions of Platinum End, Vol. 5, Volume 5