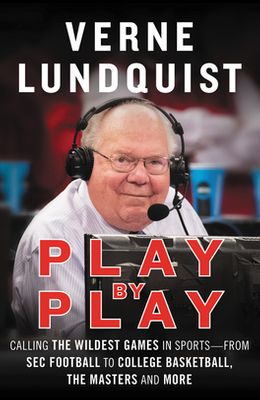 Play by Play: Calling the Wildest Games in Sports-From SEC Football to College Basketball, the Masters, and More

From the Back Cover The SEC. The Masters. The Olympics. March Madness. The Dallas Cowboys. Yes sir, Uncle Verne has seen it all. Over the last fifty years, few voices have epitomized the sound of sports television quite like that of Verne Lundquist's. A fixture on air since the 1960s--first broadcasting University of Texas baseball and Dallas Cowboys football games on radio before eventually joining the legendary CBS Sports team--Verne has covered just about every sport there is, and in the process he's made some of the most enduring calls in the history of golf, football, figure skating--and everything in between. In Play by Play , Verne goes inside those calls and his remarkable career, telling the behind-the-scenes story of how he ended up with the best seats in the house, giving voice to history time and time again. From Christian Laettner's buzzer-beater in the 1992 NCAA tournament, to the saga of Nancy Kerrigan and Tonya Harding at the 1994 Olympics, to the shocking finish of the Iron Bowl in 2013, to Jack Nicklaus's and Tiger Woods's unforgettable victories at the Masters, Verne's five decades as a sportscaster routinely put him in the midst of greatness. With his trademark humility and his goal to make the athlete the legend, instead of the call itself, Verne details his view of the plays that have captured our collective imagination for two generations, featuring an incredible cast of characters that includes names like Terry Bradshaw, Pat Summerall, John Madden, Scott Hamilton, and Tom Landry. What emerges is an invigorating portrait of the games that matter most, in life and on the field. A moving recollection of the moments that make sports worth watching, Play by Play reminds us all that sports are about more than games played--they're about the history that we share together and the voices that we remember long after the final whistle has blown.