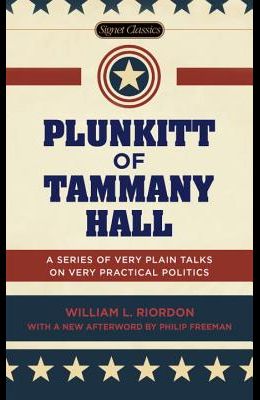 by
William L Riordan and Peter Quinn and Philip Freeman

Plunkitt of Tammany Hall A Series of Very Plain Talks on Very Practical Politics William L. Riordan Nobody thinks of drawin' the distinction between honest graft and dishonest graft. This classic work offers the unblushing, unvarnished wit and wisdom of one of the most fascinating figures ever to play the American political game and win. George Washington Plunkitt rose from impoverished beginnings to become ward boss of the Fifteenth Assembly District in New York, a key player in the powerhouse political team of Tammany Hall, and, not incidentally, a millionaire. In a series of utterly frank talks given at his headquarters (Graziano's bootblack stand outside the New York County Court House), he revealed to a sharp-eared and sympathetic reporter named William L. Riordan the secrets of political success as practiced and perfected by him and fellow Tammany Hall titans. The result is not only a volume that reveals more about our political system than does a shelfful of civics textbooks, but also an irresistible portrait of a man who would feel happily at home playing ball with today's lobbyists and king makers, trading votes for political and financial favors. Doing for twentieth-century America what Machiavelli did for Renaissance Italy, and as entertaining as it is instructive, Plunkitt of Tammany Hall is essential reading for those who prefer twenty-twenty vision to rose-colored glasses in viewing how our government works and why. With an Introduction by Peter Quinn and a New Afterword