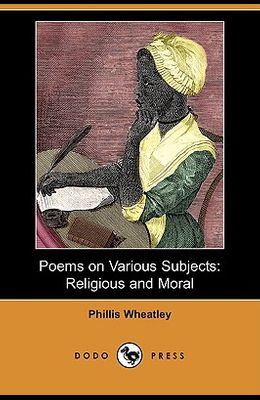 Phillis Wheatley (1753-1784) was the first published African American poet whose writings helped create the genre of African American literature. She was born in Gambia, Africa, and became a slave at age seven. She was purchased by the Boston Wheatley family, who taught her to read and write, and helped encouraged her poetry. The 1773 publication of Wheatley's Poems on Various Subjects: Religious and Moral brought her fame, with dignitaries such as George Washington praising her work. Wheatley also toured England and was praised in a poem by fellow African American poet Jupiter Hammon. Wheatley was emancipated by her owners after her poetic success, but stayed with the Wheatley family until the death of her former master and the breakup of his family. She then married a free black man, who soon left her. She died in poverty in 1784 while working on a second book of poetry, which has now been lost. Amongst her poems are: To the King's Most Excellent Majesty (1768), Atheism (1769), A Poem of the Death of Charles Eliot (1772), and Liberty and Peace (1784).