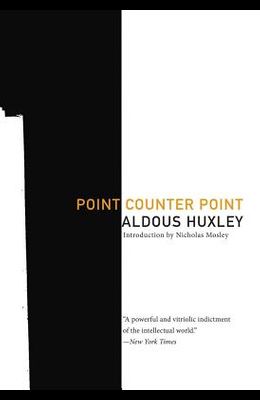 by
Aldous Huxley and Nicholas Mosley

One of Huxley's masterpieces--one of the Modern Library's 100 Best Works of the Century.

From the Back Cover Aldous Huxley's lifelong concern with the dichotomy between passion and reason finds its fullest expression both thematically and formally in his masterpiece Point Counter Point. By presenting a vision of life in which diverse aspects of experience are observed simultaneously, Huxley characterizes the symptoms of the disease of modern man in the manner of a composer - themes and characters are repeated, altered slightly, and played off one another in a tone that is at once critical and sympathetic. First published in 1928, Huxley's satiric view of intellectual life in the '20s is populated with characters based on such celebrities of the time as D.H. Lawrence, Katherine Mansfield, Sir Oswald Mosley, Nancy Cunard, and John Middleton Murray, as well as Huxley himself. A major work of the 20th century and a monument of literary modernism, this edition includes an introduction by acclaimed novelist Nicholas Mosley (author of Hopeful Monsters and the son of Sir Oswald Mosley). Along with Brave New World (written a few years later), Point Counter Point is Huxley's most concentrated attack on the scientific attitude and its effect on modern culture.