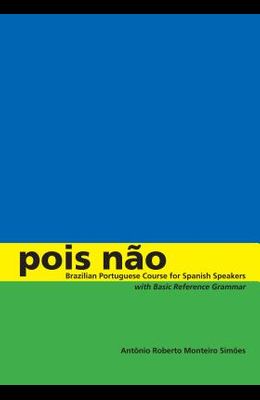 Spanish speakers can learn Brazilian Portuguese much more rapidly than any other language, and thousands of students have used Antonio Simoes's text/workbook Com licenca: Brazilian Portuguese for Spanish Speakers to make the transition between the two languages. Recognizing the need for a text that incorporates current cultural references and the latest language pedagogy, Simoes now offers Pois nao: Brazilian Portuguese Course for Spanish Speakers, with Basic Reference Grammar . Pois nao contrasts Portuguese and Spanish, which accomplishes two main goals. It teaches the equivalent of one year of college Portuguese in one semester, three times a week, to Spanish speakers who also have a solid understanding of English. Additionally, the book serves as a basic reference guide to Brazilian Portuguese for the same audience. Pois nao can be used by students in the classroom or by independent learners. Users of the book may focus on the drills alone, concentrate on both the explanations and drills, or use the book as a reference for consultation only. Answers to all of the exercises are included in the book. A CD containing recordings by native Brazilian speakers of dialogues that appear in the book is included.