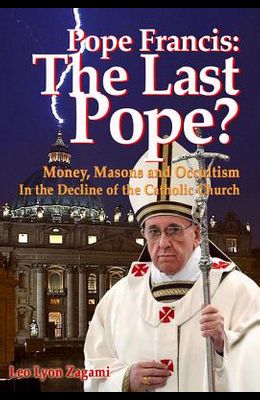 Pope Francis: The Last Pope?: Money, Masons and Occultism in the Decline of the Catholic Church

Pope Francis: The Last Pope? reveals the possible reasons for the choice of historical abdication of Benedict XVI and traces the process that led to the election of Cardinal Bergoglio: the Pope who many have prophesized will be the last and will bring the Catholic Church to its end. The book details the history of this prophecy, which was hidden away in the Vatican for hundreds of years and predicts that the reign of the last Pope will herald the beginning of great apostasy followed by great tribulation. It also explores the recent scandals in the Catholic Church and addresses questions including What pressures decreed the end of the pontificate of Benedict XVI? What powers have an interest for the Church to end? and What is the relationship between the Vatican and the New World Order? Perfect for anyone interested in prophecies about the end times, Pope Francis: The Last Pope reveals the truth about what numerology says about the last Pope and the darkness that may follow him, as well as fascinating investigations into the gay lobby, Freemasonry, and the Jesuit agenda in the Vatican and how it relates to the first Borgia Pope, the legend of the White Pope and the Black Pope, and how Benedict's resignation may fulfill an ancient prophecy.