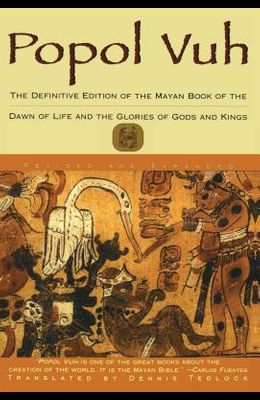 Popol Vuh: The Definitive Edition of the Mayan Book of the Dawn of Life and the Glories of

One of the most extraordinary works of the human imagination and the most important text in the native languages of the Americas, Popul Vuh: The Mayan Book of the Dawn of Life was first made accessible to the public 10 years ago. This new edition retains the quality of the original translation, has been enriched, and includes 20 new illustrations, maps, drawings, and photos.

From the Back Cover Popol Vuh, the Quiche Mayan book of creation, is not only the most important text in the native languages of the Americas, it is also an extraordinary document of the human imagination. It begins with the deeds of Mayan gods in the darkness of a primeval sea and ends with the radiant splendor of the Mayan lords who founded the Quiche kingdom in the Guatemalan highlands. Originally written in Mayan hieroglyphs, it was transcribed into the Roman alphabet in the sixteenth century. This new edition of Dennis Tedlock's unabridged, widely praised translation includes new notes and commentary, newly translated passages, newly deciphered hieroglyphs, and over forty new illustrations.