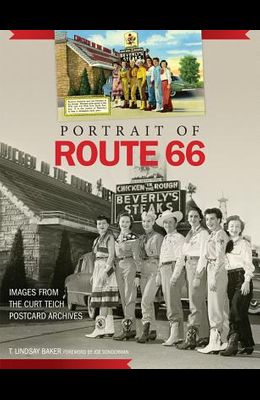 Portrait of Route 66: Images from the Curt Teich Postcard Archives

By the time Route 66 received its official numerical designation in 1926, picture postcards had become popular travel souvenirs. At the time, these postcards with colorful images served as advertisements for roadside businesses. While cherished by collectors, these postcard depictions do not always reflect reality. They often present instead a view enhanced for promotional purposes. Portrait of Route 66 lets us see for the first time the actual photographs from which the postcards were made, and in describing how the production process worked, introduces us to an extraordinary archival collection, adding new history to this iconic road. The Curt Teich Postcard Archives, held at the Lake County Discovery Museum in Wauconda, Illinois, contains one of the nation's largest collections of Route 66 images, including thousands of job files for postcards produced by Curt Teich and Company of Chicago. T. Lindsay Baker combed these files to choose the best examples of postcards and their accompanying photographs not only to reflect well-known sites along the route but also to demonstrate the relationships between photographs and their resulting postcards. The photographs show the reality of the locations that customers sometimes wanted improved for aesthetic purposes in creating the postcards. Such alterations included removing utility poles or automobile traffic and rendering overcast skies partly cloudy. This book will interest historians of art and design as well as the worldwide audiences of Route 66 aficionados and postcard collectors. For its mining of an invaluable and little-known photographic archive and depiction of high-quality photographs that have not been seen before, Portrait of Route 66 will be irresistible to all who are interested in American history and culture.