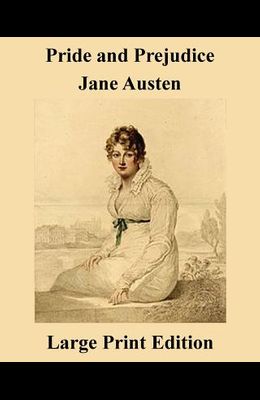 Pride and Prejudice is the most popular book ever written, even though it is exactly two hundred years old, having been published in 1817 It is currently being downloaded more times than any other book. It has been made into two major motion pictures, plus a Bollywood production and innumerable television shows including a PBS production. It has been reprinted innumerable times. More than twenty editions are available. This book is in Large Print Edition. The Fonts are 16-point type, nearly double the size of typical book printing. This is to make the book more comfortable and easier to read. It also makes the book appear to be longer. We hope the reading public appreciates our efforts to make the great classics more readable. The enduring popularity of this book is attributable to marriage which is still practiced in some circles. The word love occurs 122 times in this book. The words virgin or virginity never appear. Yet the five girls are all presumed virgins at the beginning of this book, as they are holding out to give their virginity to a man of means. That forms the plot to this book. Mr. and Mrs. Bennet have five daughters but no sons. Although the Bennets are moderately wealthy, owning land, they cannot leave any of their wealth to their daughters, as only males can inherit it. Since the Bennets have no sons, upon the death of Mr. Bennet, his property will be inherited by a cousin, Mr. William Collins. Mrs. Bennet, who owns no property, will be left with nothing. Thus, Mrs. Bennet must find wealthy men to marry her daughters or else she and her daughters will be left destitute when their father dies. The daughters are constantly warned to avoid entanglements except with men of means. The daughters however wish a love marriage, not a marriage based on wealth or position in society. It is the arrival of a new man in town, a Mr. Darcy, who has guaranteed income for life, which starts the process of trying to inveigle him into marrying one of the daughters. We are told Mr. Darcy derives his wealth from large property he owns in Derbyshire. He is from the landed gentry. At that time, a few rich people in England owned all the land. The peasants of the lower class worked the land and gave the products of their labors to the idle rich. The daughters and their parents know that to approach Darcy too aggressively about marriage would put him off, but to be too remote would cause him to lose interest. So, they have to strike a happy medium. They plan to make Darcy wild with desire so as to trick him into loving one of the daughters. Jane Austen makes a point to explain that the Bingleys acquired their wealth by trade rather than through the gentry's and aristocracy's methods of inheriting estates and making money off their tenants as landlords. The author explores the differences between Old Money and New Money. Old Money is considered good. New money is considered bad. In our modern era, we have the opposite view. We think as good the people who made their money The old fashioned way by working for it, whereas the idle rich who just collect rents from tenants who live on land they inherited are not good. In Pride and Prejudice , Darcy and the Bennets are all Old money people.