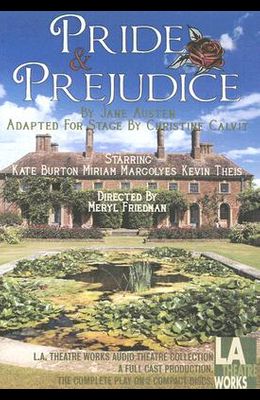 One of the best-loved works of English literature, Pride and Prejudice follows Elizabeth Bennet (Austen's favorite of all her creations) and her four sisters through a series of romantic adventures -- and misadventures. Affections, affectations, and shenanigans abound due to Mrs. Bennet's relentless matchmaking, the devious Wickham, and Elizabeth's tempestuous relationship with the snobbish Mr. Darcy, which the meddlesome Lady Catherine de Bourgh is determined to crush out. In addition to being Austen's most popular novel, Pride and Prejudice also contains some of her most astringent comments on manners and morals.

From the front Cover A 1997 recording of Christina Calvit's stage adaptation of Pride and Prejudice. Jane Austen's classic romantic comedy is a sparkling tale of the Bennets, a family blessed with five daughters and a mother desperate to marry them off. The tempestuous pairing of the witty, independent Elizabeth and her arrogant but honorable suitor Mr. Darcy sets the standard for all great couples of stage and screen. An L.A. Theatre Works full-cast performance featuring Kate Burton, Melanie Dix, Elizabeth Laidlaw, Frances Limoncelli, Miriam Margolyes, Bradley Mott, James Sie, Joao de Sousa, Sandy Snyder, Kevin Theis and Steve Totland. Directed by Meryl Friedman. Recorded in Chicago in 1997.