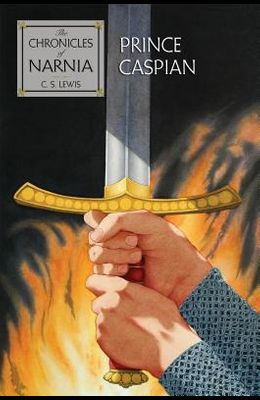 Prince Caspian: The Return to Narnia

Book #4 in the The Chronicles of Narnia (Chronological Order) Series
by
C S Lewis and Pauline Baynes
$3.88
Select Format

A beautiful hardcover edition of C. S. Lewis's Prince Caspian , book four in the classic fantasy series, The Chronicles of Narnia . The full-color jacket features art from three time Caldecott Medal-winning illustrator David Wiesner and interior black-and-white artwork by the series' original illustrator, Pauline Baynes. The Pevensie siblings travel back to Narnia to help a prince denied his rightful throne as he gathers an army in a desperate attempt to rid his land of a false king. But in the end, it is a battle of honor between two men alone that will decide the fate of an entire world. A battle is about to begin in Prince Caspian , the fourth book in C. S. Lewis's classic fantasy series, which has been enchanting readers of all ages for over sixty years. This is a stand-alone novel, but if you would like to see more of Lucy and Edmund's adventures, read The Voyage of the Dawn Treader , the fifth book in The Chronicles of Narnia .

From the Back Cover I think I'll have to go right back to the beginning and tell you how Caspian grew up in his uncle's court and how he comes to be on our side at all. But it'll be a long story. 'All the better,' said Lucy. 'We love stories.' And so the Dwarf Trumpkin tells the children of how young Caspian escaped his uncle Miraz, false King of Narnia, and found his true calling leading the Old Narnians in the fight for their freedom. Peter, Susan, Edmund, and Lucy are suddenly pulled into Narnia from their own land of England by a distress call from Prince Caspian. It has been hundreds of years since the time described in The Lion, The Witch, and the Wardrobe, when the children reigned over the land as benevolent Kings and Queens. Now most of the Talking Beasts and enchanted creatures who once lived there in peace have been killed or frightened into hiding. Only Caspian and the rulers of Old Narnia, with the help of the great Aslan, can liberate Narnia and make it safe for its rightful inhabitants.

Books similiar to Prince Caspian: The Return to Narnia

List of All Editions of Prince Caspian: The Return to Narnia